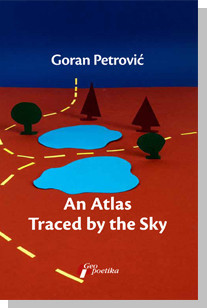 An Atlas Traced by the Sky - Goran Petrović

Have you ever wanted to own an atlas that would map out the relations between dreams and waking, between reality and imagination, between the past and the future? Award winning writer Goran Petrović offers you precisely that in his authentic postmodernist style. A cast of characters, living in a house with the sky as its roof, spend their days connecting the threads of this life with the myriad threads of the other worlds in their search for life’s meaning and happiness. They offer us maps which show the paths through birth and death, love and romance, the thoroughfare between joy and despair. By combining their tale with a collection of ancient and future documents dealing with amulets, map-making, legends and mythology, the author guides the reader through a fantastic labyrinth toward the rather astounding outcome of self-awareness. This is an atlas that will make you dream and, even more, it will show you where your dreams may ultimately lead. Some of the best qualities of Serbian postmodernist prose in Pavić’s manner can be found in this novel.

An Atlas Traced by the Sky is, paradoxically, a book which stylistically reminds us of many other books and authors (The Arabian Nights, The Decameron, Borges, Pavić, Ende...), but which actually, in its rarity, in its baroque elegance and in the feast of imagination it contains, truly does not resemble a single one of those books. Goran Petrovic has written a highly imaginative work. A whirlwind of spiritual sparks ignited by novelistic artistry, which seemingly defies common-sense logic, comes from the almost pagan customs hidden in the story.

At the very beginning it should be noted that Goran Petrovic has written a highly imaginative work. A whirlwind of spiritual sparks ignited by a novelistic artistry, which seemingly defies common-sense logic, comes from the almost pagan customs hidden in the story.